The Singer and the Song 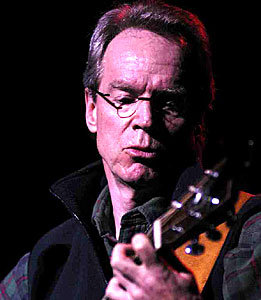 I first stumbled upon the music of Danny O' Keefe in a cut-out (cheapie) bin sometime around 1974. The songwriter's name seemed familiar but I wasn't sure I if I'd ever heard any of his songs before. He certainly hadn't performed on the Midwest folk club circuit nor had he been slated as the opening act for any of the concerts I had seen back then. And it wasn't uncommon, then, for solitary singer-songwriters poised only with a guitar (or piano) to open a show for a major headlining act. Performers such as Livingston Taylor (James' underrated and overshadowed brother) or the tragic figure of the late Judee Sill would be two among those up-and-coming songwriters I had witnessed in the early 70s.

After weighing the risks, I indulged myself the purchase of two unfamiliar Danny O'Keefe albums from the discount bin: O'Keefe and Breezy Stories. That decision proved to be a momentous discovery and a revelation. Those two albums contained divergent styles and moods from one another, but the constant was the consistently good songwriting. And that voice!

O'Keefe did, in fact, boast a song I was sure I'd heard before: "Good Time Charlie's Got The Blues." Breezy Stories was still somewhat "folky" in nature, but with a melange of New Orleans jazz flavorings and street-smart narratives. Furthermore, the album featured top-notch accompaniement from musicians such as Dr. John, Donny Hathaway and David Bromberg. Another common thread between those two early Atlantic recordings was the evocative arrangements and no-frills production style of the legendary (and recently departed) Arif Mardin.

Over the years Danny O' Keefe continued to release works that would become classics in the singer-songwriter pantheon, but seemed to evade a larger public audience: So Long Harry Truman, American Roulette, Global Blues, The Day To Day, and Runnin' From The Devil. In 1978, Jackson Browne opted to record O'Keefe's travel-weary saga, "The Road," for his own musical meditation on a musician's life that would become Running On Empty. According to O' Keefe (in a prior radio interview), the reason Jackson initially chose to include that song was that Running On Empty's original working title supposedly had been The Road and the Sky. The song (as well as the title) seemed to fit.

I had previously seen Danny O'Keefe perform a brief set at a benefit concert in Seattle back in 1980. He has never toured much and his recorded output became significantly more sporadic (that's an understatement) after 1979.

O' Keefe does have a website, although it is in woeful need of updating to make it an engaging read worth revisiting. Still, I do occasionally navigate to DannyOKeefe.com to see if there might be anything new and interesting. I was recently pleased to discover that Mr. O'Keefe was scheduled to make a rare trek to the Midwest on October 20, and more specifically, to the venue called the Cafe Carpe in Ft. Atkinson, Wisconsin. The cafe is owned and operated by another wonderful singer-songwriter, Bill Camplin and his partner Kitty Welch, who opened the place in 1985. In the 70s Bill Camplin was a prominent and highly regarded songwriter and performer on the local Milwaukee folk scene and throughout the Midwest. Cafe Carpe is now a frequent destination for many notable songwriters and performers traveling through the region.

On October 20th, we (myself, and friends, Joel, his wife, Elizabeth, and daughter, Caroline) traveled to Ft. Atkinson (about an hour west of Milwaukee) for the Friday evening performance. We felt we should get there at least an hour early, as the club is small and we were sure there would be throngs waiting at the door to view the blessed rare event.

Danny O'Keefe took the stage promptly at 8:30 (there was no opening act). After a briefly tentative start, he quickly warmed to the room. There were, by Elizabeth's count, fifteen people in the audience. O'Keefe's guitar playing was fluid and his voice was in great form -- so many singers, over time, lose the top of their vocal range and compensate by singing in a slightly lower octave or they might sing a song in the original key but won't even try to hit the higher notes. Singers like Elton John, who has had surgery for nodes on his vocal cords, and Debby Harry immediately come to mind. Others, such as Gary Brooker (of Procol Harum fame) and O'Keefe seem to be ageless in their deliveries.

Because of the smaller audience, the set had a very intimate and familiar ambience, like talking to a friend after many years. O'Keefe was generous in his set and audience repartee. Joel and Elizabeth's daughter, Caroline, had come to the show completely uninitiated to the performer's oevre and left wishing she had invited all her musician friends (she's in a band) to witness this great American songwriter singing his songs, as she had.

After the Cafe Carpe show, Danny O'Keefe was scheduled to drive to another gig in a small town in central Illinois and before heading out to the east coast (Massachusetts) for a show and an afternoon radio interview on WUMB.

They are just some other towns along the road.


Photo courtesy of the DannyOKeefe.com website
Richard Sweet at 11:27 AM